About: Sean Delonas Cartoons in the New York Post 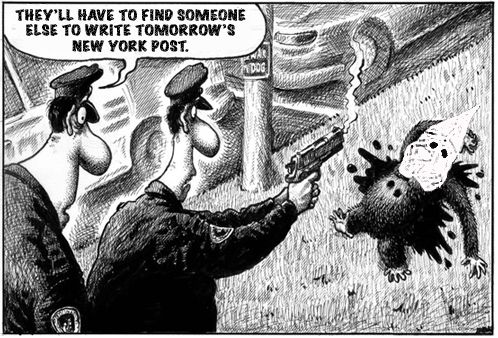 Seth says
Finally one about this that has a little chuckle to it ... thanks NYT.

Seth says
I wonder how many of the bloggers who were incensed by Obama's comment about lipstick on a pig also buy into the post's "sometimes a cartoon is just a cartoon" non-apology.  Strange how your party leanings affect your interpertations ... just more proof that the meaning of language (aka truth) is relative to the observer.  In any case the post got what they wanted ... now more people will watch their shit.   FYI the derogative depicting blacks as monkeys was a common theme in the 20th century - there is no mistaking the reference here.  Whereas Monday's police shooting of a chimpanzee in Connecticu had absolutely nothing to do with the stimulus bill.  But what disturbed me about the cartoon was the reference to lethal violence against who wrote the bill.  We don't need that.  If you laughfed at the cartoon, you are a pig, pure and simple.

I wonder if M's racist rubic 714 would have picked that cartoon out as racist.  What does that tell us about the veracity of the rubic?

... And the cops who shot the chimp, that's not a racist cartoon, that's sexist.  That's old Nancy Pelosi lying there on the sidewalk. (she wrote the bill)

Mark de LA says
Monkeys wrote the bill & monkeys signed the bill - that's my interpretation. That monkeys are bankrupting this country & future generations at an alarming & increasing speed is neither racist nor subtle. The real racism exists in the minds of those who found racism in the cartoon in first place - you, the media, the congressional racist caucuses etc.  & the racism industry. Root that racism out of yourselves first  & you will feel better.
Seth says

The monkey cartoons will die down after a few weeks just as the pig & lipstick brigade did before this.  The debts will last for much longer.  Monkeys will still get elected to Congress & all that is life will go on same as it ever was .. same as it ever was.

Those of you who are confused about the reference in the cartoon need only do a simple image search on: Obama monkey to clarify their thinking.  Of course Delonas knew this and so he penned a cartoon with a double entendre - and of course he would never acknowledge the racist implication now.  But his ability to make up those tricky references is why the post pays him the big bucks.  Obama's reference to lipstick on a pig, after Palin's speech using the same metaphor was a similar double reference.  I though that was funny - i still do.  What is striking to me is how the different interpertations of these double entendre divide us.  Like i said, it is proof of relativity.  Did you laugh at the cartoon?
I never saw the cartoon before the media got hold of it. After that, their racist attitudes & other individual racists spoiled any chance of my finding it funny. I speculate that if I had seen it first I wouldn't have found it funny anyway. Tina was turned off by the apparent violence in the cartoon.  Similarly, I didn't find movies about assassinating W amusing either!

Yep i agree - it is hard to get back to your initial reaction to the actual cartoon after all the media reaction.  I do notice that you (or perhaps just Tina) apparently see the monkey as referring to the president and not democrats in the House.  I agree with Tina - it was the violence that was more offensive than the derogatory reference.
Mark de LA says
Strangely enough, Tina only saw the violence. It was you who associated it with Obama. I didn't - I saw congress & the government.
Mark de LA says
Sharpton Calls On FCC To Investigate NYPOST/NEWS CORP...

'BIZ GIANTS PAY OR FACE RACE RALLIES'
From DRUDGE (THE ABOVE) - the wider angle on the picture.  Sharpton is following all of the Alinsky rules.
Seth says

Acting legend Clint Eastwood , 79, apparently believes that political correctness has rendered modern society humourless, for he accuses younger generations of spending too much time trying to avoid being offensive.

The Dirty Harry star insists that he should be able to tell harmless jokes about nationality without fearing that people may brand him "a racist".

"People have lost their sense of humour. In former times we constantly made jokes about different races. You can only tell them today with one hand over your mouth or you will be insulted as a racist," the Daily Express quoted him as saying.

"I find that ridiculous. In those earlier days every friendly clique had a 'Sam the Jew' or 'Jose the Mexican' - but we didn't think anything of it or have a racist thought. It was just normal that we made jokes based on our nationality or ethnicity. That was never a problem. I don't want to be politically correct.

We're all spending too much time and energy trying to be politically correct about everything," he added. (ANI)

...
Go Dirty Harry! Personally Watermelons are my favorite summer fruit. Comedians Chris Rock & Eddie Murphy have made millions on racial stereotypes. So is humor & comedy which for the purpose of making people laugh in good humor racist? I say no!
Seth says
MR 2009-02-27 13:34:56 11491

Go go dirty harry go ... don't hesitate to tell a joke ... but tell funny ones.  Delonas cartoon (assuming the obvious reference to Obama) was not funny.  There is nothing funny about Obama laying on the ground shot to death ... and even a monkey laying on the ground shot to death is not that much better.  Perhaps Deolans thinks bodies laying on the ground are always funny ... see his current opus ... or maybe he is just in a dark humor rut.
You PC individuals going around with hypersensitive chips on your shoulders about race are indeed humorless & should be put in re-education camps until you can laugh at yourselves. The original cartoon is simply not funny enough to comment on nor is your perversion with a KKK hat on the hapless ape funny either.  All of you should be sent to camp!  The really funny thing about the whole thingy is that y'all have given Sean Delonas more national attention than he ever deserved; whereas had y'all ignored him & his cartoon altogether nobody would remember who he is.

I saw that one go by and didnt think it was all that funny.  But i'm sure that sombody will come up with a soul food joke/BBQ joke about the Obama white house that will be a side splitter.  Generally speaking partisan jokes are only funny to one side - good political humor is funny to both sides.
Mark de LA says
Watermelons are still my favorite summer fruit!
Mark de LA says
seth 2009-03-02 14:39:25 11491

I saw that one go by and didnt think it was all that funny.  But i'm sure that sombody will come up with a soul food joke/BBQ joke about the Obama white house that will be a side splitter.  Generally speaking partisan jokes are only funny to one side - good political humor is funny to both sides.
Yep, wasn't a side-splitter - many jokes are not! You have more access to humor when you can laugh at yourself!
Mark de LA says
Apparently good judgement doesn't prevail in the PC climate.  Another official, this time Staten Island, NY member of the Community Education Council emails racist jokes around.
The biggest joke of all is that I stumbled into the Urban Dictionary's definition of his last name:
Now with a last name like that I would probably watch my sense of humor! I wonder if he can tap-dance out of this one. Nota bene - the cartoons IMHO had no humor in them.