About: zoom to album 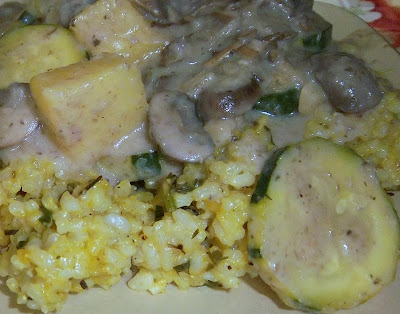 I used Pearl Rice instead of Arborio this time for the risotto ... primarily because i wanted to see the difference.  It does cook up stickey, but perhaps not so very much.  I still need to dink with the flavoring ... the curry was an afterthought but actually worked.

For the mushrooms i used Crimini and Oyster ... and learned not to use Oyster at $6.99/lb when Crimini are $2.99/lb and don't end up all chewy.  What worked again with the sauce was reducing down the stems by boiling them in stock and wine in separate pot, then blending fine with food processor.  Yep sauce was pretty tasty and went well over the Zucchini ... though i'm not so sure whether it worked over curried Risotto.  You can always put pineapple in any dish like this if you like it.