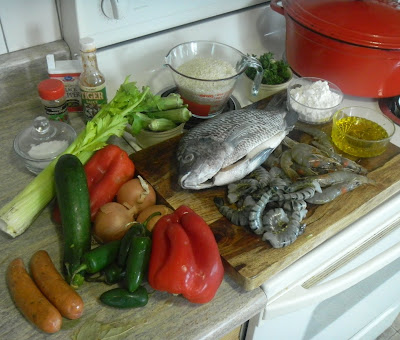 Pictured here (zoom to album) are the ingredients for this big oven recipe of gumbo.

I just realized that it is totally fun to butcher a clear eyed fresh fish ... your mileage of course varies ... but it was my first time ... and  Fishy Tilapia laying there on my chopping board got my cherry.

You may also notice that i made some variations to the recipe ... i added zucchini, substituted jalapenos for cayenne peppers, included two varieties of shrimp, and substituted  ... not to mention of course tilapia for crab meat and oysters.

Now i though the shrimp gumbo turned out every bit at good as the chicken gumbo which i made last time ... none the less because i was totally in my zone when i made it.  But Denise went "eech", which is code for "i didn't get what i really wanted".  You see, yesterday she wanted chicken gumbo, but i wanted to make seafood ... too bad about that, chefs powers here.  But then i've made shrimp gumbo for here before that tasted almost identical to this dish and she loved it.   I disappointed her expectations ... oh well ... i met mine

... she also missed the biscuits 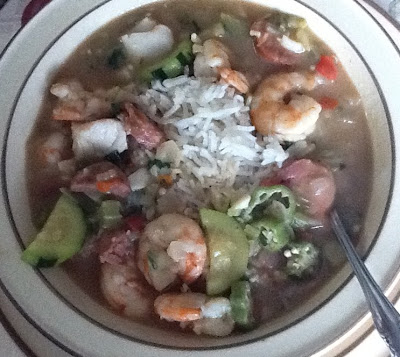 And here is what the dish looks like (zoom to album).

You might note that the picture resolution is quite a bit less than than that of the ingredients.  There in lies a tale.  Right in the middle of taking the picture with my camera, it ran out of juice.  Now it should not have (period) ... that it did only testifies that our modern devises have not had sufficient time to evolve into the prefection that we expect ... things are moving way to fast for sufficient evolution to have taken place.  And i said all that just to say the battery in my Nikon S80 sucks ... and sucks badly 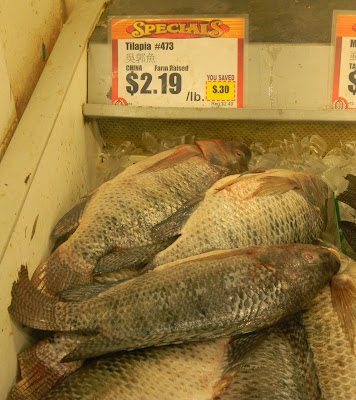 Here is where i caught Fishy.

When T makes gumbo she always puts some kind of tomatoes in it which gives it a red color like your big oven recipe looks like but he did not list it in the ingredients. Anyway, I like tomatoes in mine.

Yeah i've heard others tell me that they expected a tomatoes in their gumbo.  This gumbo is reminiscent of gravy because that is the dominant rue that you start with.   Maybe i should try it with tomatoes.

One thing i just remembered is that i mix lemon or lime with honey and add that to the pot to give it that acidic twang that i seem to crave.   I'm now wondering if that might be enhanced by tomatoes.