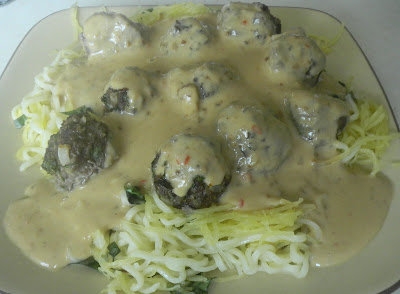 This was a chopped game.  The secret ingredients were:

I baked the hamburger with the usual ingredients for meatballs along with the spaghetti Squash, then made some Thai peanut sauce roughly according to this recipe except i added coconut milk.

It was good, even Denise said she would eat it again.

If i were to do it again, i would use less coconut milk in the sauce ... that made it a bit heavy, but very creamy.  The noodles and squash could have been served a bit hotter.  I'd probably look around for a different meatball recipe, these were a bit dry or perhaps i cook them a mite long.

All and all it was a success with no major flaws in the dish.  I could only be chopped if 2 other people made a much better dish.

making the peanut sauce today for my remaining cod cakes