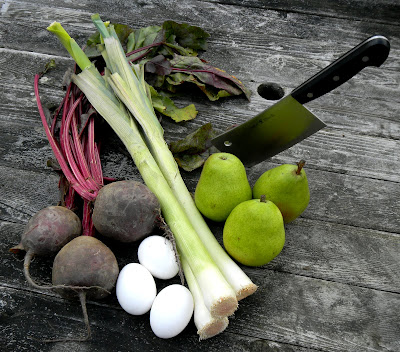 We got this challenge from  Jeanie Graham ... thanks, it was a great challenge indeed!   ... a hard one, but that made it a lot of fun.

My entry ... Potato Leek Casserole with Pickled Beets and Eggs in a Arugula Goat Cheese Pear Salad ... my facebook entry for this is here. 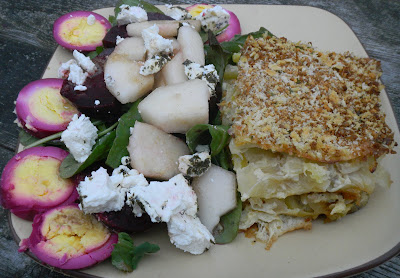 For the pickled beets and eggs i followed this recipe, fairly accurately.  They were ok, but i'm not so very sure i will make them a stock item in my diet.

I put the pickled beets and eggs in the salad for which i got the idea from this online recipe but i used this orange dressing instead.  I liked that dressing on the arugula and liked the goat cheese notes against the sweet pears ... but don't really think the beats added much, nor did the salad make a coherent statement.

I made the Potato & Leek Bake from this Irish Side Dishes Recipe.  Although i followed the recipe fairly accurately i didn't execute it well ... i didn't' have enough leeks in proportion to the potatoes and i didn't bake it long enough ... consequently the potatoes were a bit chewey and the leeks did not express themselves enough.

So, all in all, i made a eatable plate with no total disasters ... but any chef with a delicious plate could chop me.

Norma Torres made a Leek tart, roasted beets and pear salad for this challenge.  Read her review here. She reviewed her dish as follows:
source: Norma Torres

My review: not so great. I'm lactose intolerant so I had to switch out the dairy. Almond milk is not a problem, but the goat cheese wasn't strong enough to sub for the cheeses called for. The tart (pie) tasted like scrambled eggs and needed salt. The beets and pears also felt like they lacked something. I won't use this leek tart recipe again, but I can improvise the beet and pear salad to my liking.

So who gets chopped?  I don't know, you decide, but I sure learned a lot in the challenge, so i don't care.