The UN debating society is also asleep as far as the Main $tream Media is concerned. I appreciate that it is not wise to encourage a psychopath by showing opposition or strength but where is the red line on this one?

Prepares for 'strikes against the US mainland'...

Mark de LA says
http://www.nytimes.com/2013/03/26/world/asia/us-and-south-korea-sign-plan-to-counter-north.html?_r=0
I guess the word is not to show signs of being provoked.
I still don't see the UN useful here.

NKorea cuts all channels with South as 'war may break out any time'...

US urges NKorea against further escalation...

Mark de LA says
How much more can the Norks say to try to scare the USA?

Mark de LA says
Fair summary for the day on the standoff:

During a meeting with other South Korean officials, the official, Kim Jang-Soo, also said the notice to diplomats and other recent North Korean actions are an attempt to stoke security concerns and to force South Korea and the U.S. to offer a dialogue. Washington and Seoul want North Korea to resume the six-party nuclear talks — which also include China, Russia and Japan — that it abandoned in 2009.

The roughly two dozen countries with embassies in North Korea had not yet announced whether they would evacuate their staffs.

British Foreign Secretary William Hague suggested that North Korea's comments about foreign diplomats are "consistent" with a regime that is using the prospect of an external threat to justify its militarization to its people. 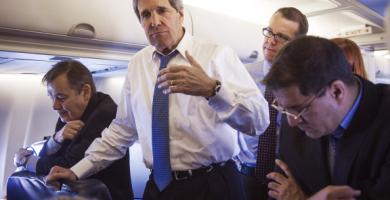 North Korea's release of its preconditions for talks on defusing tensions on the peninsula is perhaps the best indication yet of the manufactured nature of the latest Korean crisis. Released April 18, the demands are that the United States and South Korea cease all provocations and apologize for them; that they pledge not to hold nuclear war exercises that threaten Pyongyang; and that all weapons systems that could be used to carry or deliver nuclear weapons are withdrawn from South Korea.

Over the past few weeks, official and unofficial comments from the United States, South Korea, China and North Korea have indicated that all sides are beginning the process of negotiating the start of formal talks. Each side is presenting its most extreme demands for the restart of talks, a basic negotiating strategy. But by presenting its demands, each side is also reinforcing the idea that it is willing and interested in negotiations.

Formal negotiations may not begin soon, but this fits with the historical pattern of North Korean manufactured tensions and subsequent discussions. Pyongyang frequently raises tensions during the annual U.S.-South Korean military exercises in the early months of each year, and with these exercises winding down at the end of April, Pyongyang is now signaling its intent to slowly reduce those tensions.

Seoul and Washington also appear aware of and willing to work within this pattern. Although there was an attempt to try to outdo the North Koreans on the psychological battlefield (for example, by publicizing the participation of certain U.S. aircraft in the South Korean exercises), in the end, each side was working within the expectations that the chances for significant combat remained low, that North Korea was working within its traditional parameters -- even if its rhetoric has reached higher levels than it has in the past -- and that all sides were hoping to wait out the others. North Korea's decision to deploy but not launch the Musudan missiles gives Pyongyang the ability to retain the threat of resurgent tensions while also to pointing to an element of restraint that can be considered a further signal of its willingness to engage in discussions -- in essence, Pyongyang can quietly claim the lack of a launch thus far was itself a concession.

Perhaps more interesting is Pyongyang's open suggestion that its nuclear weapons are beneficial for both the North and South, but that Seoul's continued dependence on the U.S. nuclear umbrella leads to "ruin." Pyongyang is playing on the disagreements and quiet competition among the other interested players, particularly South Korea, Japan and the United States, but also China. What Pyongyang is suggesting is one of the major fears of Japan, and even of China and the United States -- a nuclear-armed, unified Korea, leaning neither toward Beijing nor Washington. This is not only the grand vision of North Korea, but also the repressed vision of South Korea.

The idea of a strong, reunified Korea capable of independent defense and the pursuit of its own strategic interests without being beholden to China, Japan and the United States is a long-term desire, even if the path to reunification is fraught with high economic and social costs. The South is not likely to jump at this statement and declare its approval of North Korea's continued nuclear program, but there are some in Seoul who certainly have quietly eyed the North's program as a potential strength for a future, unified Korea. The thought of this will unsettle many in Tokyo, Beijing and Washington, perhaps accelerating their acceptance of the need to re-engage Pyongyang sooner rather than later to retain a strong role in the outcome of any dialogue or any evolution of North Korea or its relations with the South. In this, Pyongyang is once again proving adept at playing off the differences of the other members of the six-party talks to keep the initiative largely under the North's control.

didn't know South wanted to unify with the North.