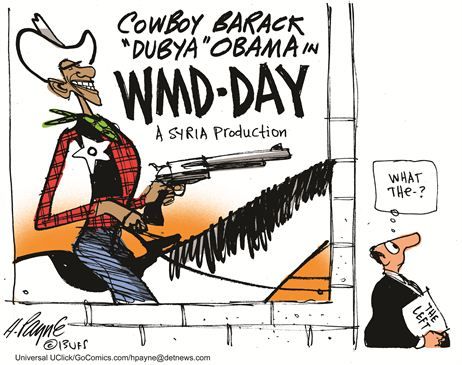 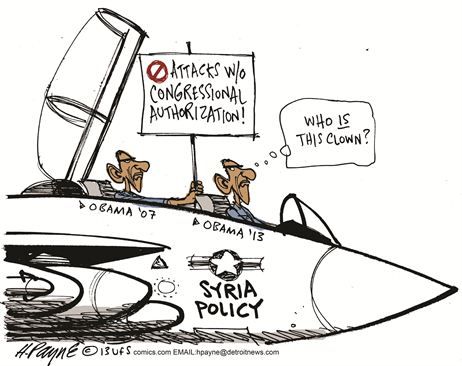 Seth says
I still don't understand why he doesn't punt it into the lap of the UN & shame the UN & the World if no effective action takes place.  In such case he should defund the UN. 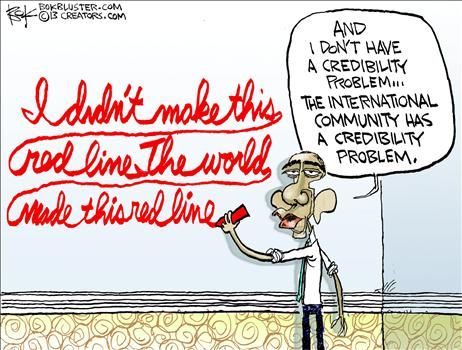 Seth says
Remember when candidate & senator Obama said that he would solve Iran's nuclear weapon problem by sitting down & talking with their government - maybe Ahmadinejad?


The dirty little not-so-secret behind President Obama’s much-lobbied-for, illegal and strategically incompetent war against Syria is that it’s not about Syria at all. It’s about Iran—and Israel. And it has been from the start.

By “the start,” I mean 2011, when the Obama administration gradually became convinced that it could deal Iran a mortal blow by toppling President Bashar al-Assad of Syria, a secular, Baathist strongman who is, despite all, an ally of Iran’s. Since then, taking Iran down a peg has been the driving force behind Obama’s Syria policy.

Not coincidentally, the White House plans to scare members of Congress into supporting the ill-conceived war plan by waving the Iranian flag in their faces. Even liberal Democrats, some of whom are opposing or questioning war with Syria, blanch at the prospect of opposing Obama and the Israel lobby over Iran.

... The Nobel Prize winner apparently abandoned any semblance of talking things out, eh?

Seth says
So where did Iraq & Syria get the chemical weapons in the first place, SYRIA ????  Just taking them back until they need to use them again while kicking the USA out of the Middle East? Seth says
source: ...
... Maybe plan B ? I wonder if the Congress will vote Obama war "to back him up" for plan B? It might be more believable if Assad signs the rest of the so-called Geneva Conventions. But the US has not ratified some of them either. 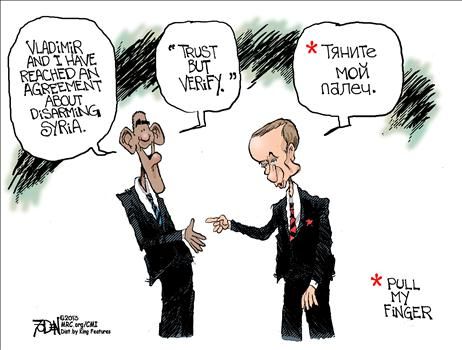 one republican is honest enough to out himself
Can't discern what the posts said. Too bad. Everything is considered racist these days.
Mostly by racists. Redskins ... Missouri riots ... etc.

one republican is honest enough to out himself
Can't discern what the posts said. Too bad. Everything is considered racist these days.
Mostly by racists. Redskins ... Missouri riots ... etc.