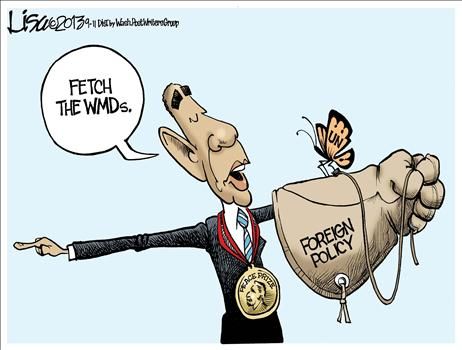 Trust but kiss your ass
goodbye!

Seth says
If Putin & Syria are serious, let Putin declare that he will no longer sell/give arms to Syria & Iran & open those countries to UN inspection of the most open kind for WMD of any kind.

Seth says
There's power in money & power in war. Without the money there is little power to make war. War is taking power by means other than political.
OTOH, making peace might require a different substance.

source: Putin in an OpEd to the American people in response to Obama's speech

A new opportunity to avoid military action has emerged in the past few days. The United States, Russia and all members of the international community must take advantage of the Syrian government’s willingness to place its chemical arsenal under international control for subsequent destruction. Judging by the statements of President Obama, the United States sees this as an alternative to military action.

I welcome the president’s interest in continuing the dialogue with Russia on Syria. We must work together to keep this hope alive, as we agreed to at the Group of 8 meeting in Lough Erne in Northern Ireland in June, and steer the discussion back toward negotiations.

If we can avoid force against Syria, this will improve the atmosphere in international affairs and strengthen mutual trust. It will be our shared success and open the door to cooperation on other critical issues.

My working and personal relationship with President Obama is marked by growing trust. I appreciate this. I carefully studied his address to the nation on Tuesday. And I would rather disagree with a case he made on American exceptionalism, stating that the United States’ policy is “what makes America different. It’s what makes us exceptional.” It is extremely dangerous to encourage people to see themselves as exceptional, whatever the motivation. There are big countries and small countries, rich and poor, those with long democratic traditions and those still finding their way to democracy. Their policies differ, too. We are all different, but when we ask for the Lord’s blessings, we must not forget that God created us equal.

... my first reaction was ... Fuck Putin, Fuck him in the ass ... but read the whole piece ... i too think it would be better for America if we stopped thinking that we must be the world's policeman ... and "American exceptionalism" is perhaps a childish notion that we would do well without.
Yeah .. I don't like Putin's exceptionalism either.  He apparently got away with giving wmd to Syria & maybe Iraq before that.  He's in bed with terrorist regimes like Iran ..... yep ... the last thing he wants is that pesky America out there claiming their own exceptionalism.   He even gassed his own people with the Chechyn theatre takeover. Communism makes everyone else equal except the ruling class - just like the Chicoms & Bolsheviks .  It's a power thingy. It is not logical, rational or solvable by rhetoric - political or otherwise.

28. Now a curse upon Because and his kin!

29. May Because be accursed for ever!

30. If Will stops and cries Why, invoking Because, then Will stops & does nought.

31. If Power asks why, then is Power weakness.

32. Also reason is a lie; for there is a factor infinite & unknown; & all their words are skew-wise.

Well if Putin continues to insist that America give up the threat of force against Syria as a pre-condition to agreeing to put the poisonous gas under international supervision,  then Putin has screwed us indeed.   That would be a really exceptional defection and a stab in the back.  That is where i really got my impulse to Fuck Putin, Fuck him in the ass.
To me it is just a froggy-fuck - stalling for time while Putin gets more power & Syria kills of more rebels & more rebels convert to AlQueda .....

Seth says
... rather in his speech Obama said "The US military does not do pin pricks" ... and whether you believe that or not, he certainly said it quite convincingly.   It was Kerry who made the "gaff", that you quote above.
Seth says

and Carry an 'Unbelievably Small' (*)
Seth says
The rest is Kabuki Theater for the Masses - & a Dog & Pony show for the American citizens.

Perhaps reforming the corrupt UN might be a start.LOL
When you figure that one out then reform the corrupt congress & executive branches.