Louis Tice back in the 80's gave a seminar for Crocker Bank managers & anyone who wanted to attend called New Age Thinking . The set of tapes which go with the seminar is buried deeeep in my storage. Perhaps the about box is a good reference.  The contents seem to have been repeated in this decade over and over. It was the first time I had heard of the phenomenon of focus on getting a yellow car & you will begin to see yellow cars all over the place, but miss the green ones. Another way he put it was while driving down the road you see a tree in the distance & all you think of is "I don't want to hit that tree" & if all you do is focus on not hitting the tree - boom! you hit the tree. The little word not gets ignored by the brain. He attributed such phenomena on the Reticular Activating System which has other functions described in the Wikipedia here.
Fast forward to NOW & the racism thingy & apply such distinction [my: item 10838] which Seth thumbed up & his current bs on it here.
What has focusing on race produced that is better than human?
Have we gotten more racially polarized or less?
Have we now created a thought police mentality looking everywhere (a la McCarthyism) for evil racists? Is it being spearheaded by the US Attorney General?
Has even the word black now become racist?

Focus on what you want like human being & discard your racism - some folks out there might discover that it is much more fun
& you can still
celebrate human biodiversity coming from human characteristics
The Arts, Music, style, food, struggles, families ...

yep, do not focus on race unless you want to be a racist ... er, don't even focus on anti-race ... er, not even reverse racism ... not even it upside down. 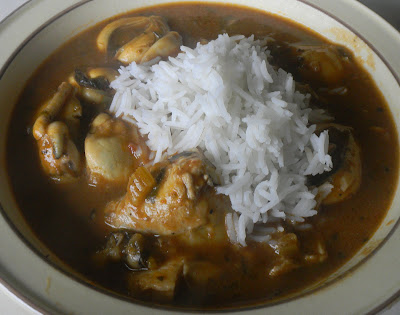 How do you chew the sausage & shrimp without teeth?
I love Gumbo, though. I first tasted really good gumbo in the Atlanta Fish Market restaurant in the late 90's

Seth says
source: mark
How do you chew the sausage & shrimp without teeth? i think you are underestimating, as many people do, the power of the tong against the roof of the mouth.

there is almost noting that i can't eat ... the exceptions being very tough meat and crisp salad.

shrimp, andouli sausage, all went down well.  the only thing that even gave me pause was the steamed red peppers which i put in there because denise complained of not enough vegetables the last time.

incidentally this time i used a quart of whey from the making of goat cheese instead of the fish stock.  i was told it makes an excellent soup stock ... but i kind of had to fight the acidity of it as i composed the flavors ... er, so as to achieve that traditional gumbo taste.  but with all the fish and sausage and a tabelspoon of honey i think i nailed it.