About: (see the list of them at Wikipedia) ... below 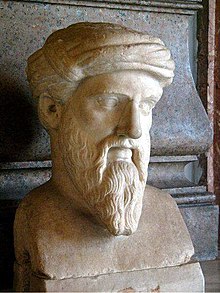 The Golden Verses of Pythagoras (Wikipedia)
He did have a Mystery School
source: ... Pythagoras' religious and scientific views were, in his opinion, inseparably interconnected. Religiously, Pythagoras was a believer of metempsychosis. He believed in transmigration, or the reincarnation of the soul again and again into the bodies of humans, animals, or vegetables until it became immortal. His ideas of reincarnation were influenced by ancient Greek religion. Heraclides Ponticus reports the story that Pythagoras claimed that he had lived four previous lives that he could remember in detail.[54] One of his past lives, as reported by Aulus Gellius, was as a beautiful courtesan.[55] According to Xenophanes, Pythagoras heard the cry of his dead friend in the bark of a dog.[56]
...