Seth says
it appears at surprising times ... and although externally predictable ... is not to my inner spirit ... so i anchor in it from inside to the cosmos.  this month, so far, i missed the edge ... it was behind the clouds ... yet time remains.

Mark de LA says
From Frazer in the Wikipedia.

The Story of the Waxing and Waning Moo 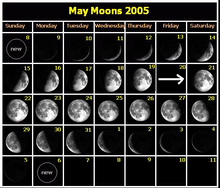 The phases of the moon

The moon regularly seems to disappear and then return. This gave primitive peoples the idea that man should or might return from death in a similar way. Stories that associate the moon with the origin of death are found especially around the Pacific region. In Fiji, it is said that the moon suggested that mankind should return as he did. But the rat god, Ra Kalavo, would not permit this, insisting that men should die like rats. In Australia, the Wotjobaluk aborigines say that the moon used to revive the dead until an old man said that this should stop. The Cham have it that the goddess of good luck used to revive the dead, but the sky-god sent her to the moon so she could not do this any more.