i picked up a old copy of this at a ephemera show in Kent.

a good read in fact  ... especially for those into Zen


source: Alan Watts
Always in the "anti-naturalness" of both Christianity, with its politically orderd cosmology, and technology, with its imperialistic mechanization of a natural world from which man himself feels strangely alien.
The highlighted phrase struck me as true .  I have never heard it put that way.  But if you think about it, Christianity believes in a political hierarchy ... a complicate one at that ... which is absent in the Zen.

What is called the Christian Church doesn't embody exact fidelity to what Christ taught which is mostly the Golden Rule in a bunch of parables & of the Spiritual World.  It is a church of men & women. The Roman Catholic version has been corrupt with politics since the early days & is today.
Attacking it on the other hand is not Zen either!


It seems to me that the very nature of separating God from nature and man and then throwing in "the son of God" and "the holy ghost" is to talk of a political hierarchy.  Oh sure we can wish all of that talk away, and grock a Christian essence apart from it ... after which it will be hard to recognize it as what people refer to as "Christianity".  I am with Watts, the Zen master, in recognizing as true that what we call "Christianity" in the world today embodies a "politically ordered cosmology".
Yep. Anything to disparage the Christian Church, maybe Islam is your meat.  Maybe read some of the Revelations of St. John the Divine about the various churches & you might get a different idea. BTW, you & Watts must think you are God if there is no hierarchy.  All one level & no functions more critical than any other.  Even the Internet has domain servers.
OTOH, I have no idea of what a politically ordered cosmology is relative to Christianity but apparently you pretend to know. A hierarchy like a classification is something you imagine & merely is the result of how much one is conscious of or how far one's consciousness extends. If one is at the level of a rock instead of a plant or a monkey or maybe some humans & perhaps some Zen Masters , one may intuit a hierarchy.  If one is just disparaging that which may be more profound & conscious than oneself then one is just building a selfie for protection.   Good Luck with that!

Hmmm... glad to meet you!
OTOH no mention of God in that phrase. I have always interpreted that phrase of Watts as the characterizing an experience of NOW. Hierarchy does not necessarily mean separation as I explained in the levels of consciousness stuff. Although I liked the Starwars movies, I did not absorb it as my ontology or weltanschauung .

OTOH, Watt's statement seems to be profound bullshit & contradict my experience & project the entire Universe into what I am doing. Can you feel the entire Universe giving you the finger right now at this moment?
(with a little help from my little messenger): 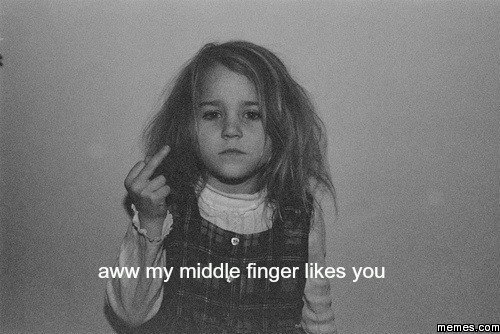 "The lady doth protest too much, methinks" -- Hamlet by William Shakespeare.
Seth says Seth says
source: mark
BTW, you & Watts must think you are God if there is no hierarchy.

Glad you noticed ... "What you do is what the whole universe is doing at the place you call here and now" -- Alan Watts

The separation of God from man and nature is the imagination of an artificial hierarchy.  I strive to recognize The Force in my actions.  Imagine your separation from that just as you will.