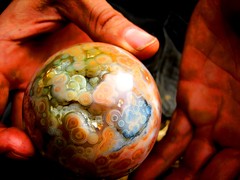 In The Wizard of Oz the Great Oz urges against paying attention to that man behind the curtain over there. When we are amazed/amused by "magicians" we are "tricked" into the belief that there's some teleportation going on and when the real explanation is given we can get a new understanding of how it's done but we still can't perform it ourselves.

So the dolphins at Marineland have been trained to jump through hoops and we feel sure that the behavior was strongly moulded by their trainer (no longer believe it was done via telepathy), but we can't get them to do it. I've practiced playing the drums I build, but I'm very much a novice at it, even after years of trying to get so that I can play as well as people named Mongo or Chano.

Doctor Crossley gets the inmate to quit screaming and appear to be selecting the right keys to have the machine make sentences. After we get over the magical aspect that demanded the subject/patient/PWD rather suddenly learn complex grammatic structures and good spelling and determine that the facilitator is "typing through the subject", we still are faced with the fact that, even if the explanation is different than what is proposed, the screaming stopped.

If the student who previously couldn't (and still can't) talk now sits in the classroom and with the help of a facilitator starts writing poems, the question becomes not "how did she do that?" but "why were we keeping her locked away and tortured?"

Another example is a limbless person. If there were a really elaborate robot that could be controlled by whatever means were still available (arching eyebrows, winking, grunting,twitching), the person could do all the functions using the robot that are now done by the "attendant". As you watch the symbiosis in such a pair it's transparent how they communicate and that whether the facilitator is mom or a paid professional doesn't affect the fact that she gets fed/dressed/bathed which she clearly cannot do without help. In fact in some sense we are ALL interdependent in lots of matters involving stuff like the power grid and all these gadgets that we use as black boxes maintained by others.

So, yes the ecstacy many parents felt when their autistic children miraculously/suddenly started reciting Shakespeare was based on a flawed theoretical basis - in the end it doesn't matter all that much because they are now connected-with and as in the case of not screaming all the time, they're no longer as much burden as companion!

In other words, we need to view B.F. Skinner from a non-magic viewpoint. Carrots/sticks modify behavior - and in ways he predicted and under the direction of people he trained - the birds do indeed perform in the state fair shows and the bears learn to operate a trapeze.

I don't know if Anne McDonald speaks for herself or only when Rosemany Crossley is facilitating. But she's not lying on the floor of the "asylum" waiting to die pitifully - she's a published author and world traveler. She graduated from college and probably had no more help than certain star athletes to do so.