The Rise of Gobbledygook.

Also -→    (*) Would a petrified turd in a bag of marbles be a marble? Only in the context of marbles. In the same sense there is 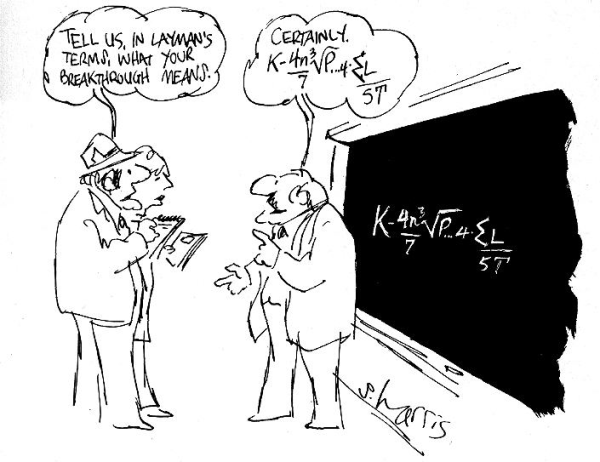 incidentally mentographs are a lot of work … the one i quoted which showse some relationships between intensional and extensional was drawn maybe 16 years agoa and probably took me most of a day.
Mark de Los Angeles 2016-04-30 10:11:33 [item 20870#51729]
Just as an aside I tried several times to read the about link & make sense of it.  The first time I read something and it smells like bullshit I have the overwhelming desire to stop trying. Word salad is not my thingy.  I have however an example of one of GW’s diagrams which is pecular to the cube & yet I have yet to figure out how it is constructed – specifically the direction of the arrows; some kind of an astralit. The point of some of what we have been discussing is also in P.2624 ok hex #52 of the commentary in the text. 
It’s the difference between bottom up rather than top down … inductive rather than deductive. It is reasoning from example to thought, rather than from thought to example. Instead of presuming that the language of our thoughts holds the truth of the matter, we look at what actually is, external from our selves, and work backwards to how to think about it.

… but then you almost certainly will not trust my mind.  ← oh well
Mark de Los Angeles 2016-04-30 10:28:04 [item 20870#51733]
Inductive & deductive not same as bottom-up & top-down . They may be tzu, by dropping & adding properties to the scenario within which they appear.
Maybe if Alzheimer’s sets in I may need to trust another mind – I’m not there yet nor do I expect to be there ever!
bottom up is going from specifics to generalities … top down is the opposite direction.   inductive and deductive is talking about those same approaches to apprehension.    try examples of both and see. ← er, that is the extensional method.

or from the top down, you could just presume that i am full of shit ← that is the intensional method.

Seth says
indidentally i think Zen … and the whole direct experience … and being … can be the pinnacle of the extensional approach … wallow in the specific … be there … rather than in a subjective mind ...which is the opposite direction.

← strange how that works out between us, eh?

and yes,  there in lies the rubb,  that is why a mind … any mind … is subjective … it is subjective to the things already in it that come to bear on any interpertation.

as far as i can tell we are still in agreement.

i hate to say this again and again … but your sentences about you ring quit a bit truer to me than the ones you write about me.   hmmmm …. now what is that an example of?  my rwg, or the nature of thought and the qualia of truth.
Well you are the one with the subjective truth! Enjoy!
Mark de LA says
Seth 2016-04-30 12:15:36 [item 20870#51742]
everybody’s feelings of what is true are theirs and theirs alone … remember what you said above … “How can 2 separate minds be the same? If they can’t then they disagree, eh?”.   Me, i have just noticed it … er along with most of the scientific community.
Including this/that one which I don’t have
Mark de LA says
G+ on subject: https://plus.google.com/u/0/s/intensional%20logic/top
https://plus.google.com/u/0/s/extensional%20logic/top

re https://plus.google.com/u/0/s/extensional%20logic/top which is a tag room corresponding to ours here extensional.   it is hard to talk about extensional without also talking about intensional.  … but sorry the spelling and translations on that one are not accurate at the moment.

tag rooms are collections defined bottom up by examples, not by top down definitions.  ← that is a fact.

doing it is a case of thinking extensionally.  ← also a fact (thought debatable).

Do you see any value in thinking extensionally rather than intensionally ?  Thinking with examples, rather than thinking in abstract definitions?  ← a real question, i am truly curious.
Mark de Los Angeles 2016-05-02 07:33:27 [item 20870#51775]
Nope! I just tag something with a word or words so I can find it again. I think twitter uses a #hashtag. Not “thinking” extensionally or anyway just about context & how I can remember the word again.  Your extra jargon does not help.
ok that brings up the distinction between what you call “thinking” and what i call “thinking”.   obviously that word does not have a 1-1 correspondence to what is, if you consider your mind and my mind together as a unified whole.

… going out on a limb here … so what is vindicated,  GW’s document,  or your aug of a intensional/extensional spectrum? ← just a provocation, not necessarily a valid question.

? … ahhh … isn’t awareness grand! … you can see it right there in the babies eyes