About: consequentialism - wikipedia, the free encyclopedia

Ethical egoism can be understood as a consequentialist theory according to which the consequences for the individual agent are taken to matter more than any other result. Thus, egoism will prescribe actions that may be beneficial, detrimental, or neutral to the welfare of others. Some, like Henry Sidgwick, argue that a certain degree of egoism promotes the general welfare of society for two reasons: because individuals know how to please themselves best, and because if everyone were an austere altruist then general welfare would inevitably decrease.[12] 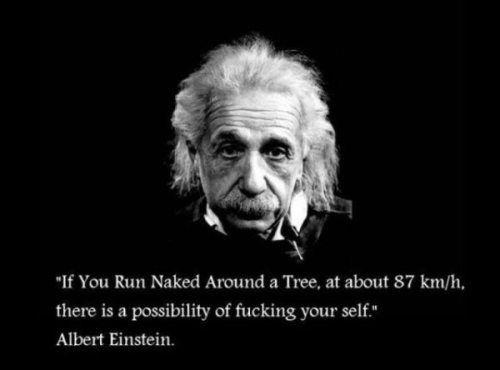 Seth 2016-05-23 15:55:46 [item 20940#52316]
… but i think the meme writer got the velocity wrong … it should be 299,792,458 miles/second.
Might depend on the length of the cock at the speed of light.
Seth says
Mark de LA 2016-06-05 00:22:12 [item 20940#52622]
just because you intuit a sequence does not mean they form a valid caus-effect chain
Mark de LA 2016-06-05 06:58:24 [item 20940#52623]
The well known butterfly effect metaphor relied on for climate people. Chaos theory sounds like an oxymoron but the application of the mathematics may be the error. Chaos itself is an interesting word.
Statistics & politics are only as good as their fit to reality. Notice that the double-pendulum picture always seems to draw the same pattern even though intuitively it is not as neat as the single pendulum would predict. What you don’t know may be unequal in importance as what you do know. When/where you get back on your train of thought  may be as deterministic as where you got off or got lost in your reasoning.
Wolfram on chaos here (no clear definitions of ..)

Gleick (1988, p. 306) notes that "No one [of the chaos scientists he interviewed] could quite agree on [a definition of] the word itself," and so instead gives descriptions from a number of practitioners in the field. For example, he quotes Philip Holmes (apparently defining "chaotic") as, "The complicated aperiodic attracting orbits of certain, usually low-dimensional dynamical systems." Similarly, he quotes Bai-Lin Hao describing chaos (roughly) as "a kind of order without periodicity."

Maybe the challenge about why/how did existence show up or human beings become is still up for grabs.
hmmm … interesting .   i am provoked by the question:  “does an intuited sequence form a valid caus-effect chain?”.   but i would sure want to separate the idea of a “cause-effect chain” which certainly happens externally in the world … form the idea of a “valid” train of thought.   the intuited sequences happen internally  …. cause and effect waves happen externally … they can match or not (synthetic truth).  then too a train of thought can have its symbols scrambled,  and hence not even match within itself (analytic truth).   ← which is pretty much the classical way to think about this.  i have yet to find a better way.  What were you thinking when you pennned it?

I can heartly agree with, “Statistics & politics are only as good as their fit to reality.” ← er which is why i go with what happens .

And, certainly yes, “why what happens, happens, and shows up to me, and to us, remains for me a total amazement ”.   New things keep showing up … even faster and faster.   I doubt that a human being, or even a human society, can truly grock our own perdicament.  Who does this stuff?  Kudos indeed !

Chaos not yet become Cosmos

… which fascinates me.  Here is RS on the subject.
Seth 2016-06-06 09:39:23 [item 20940#52639]
Well, "a living conception of space, not empty and infertile [like the concept of space for the man of today] but a concept of space appearing infinitely fertile, bearing countless seeds"  pretty much describes my concept of what we call "chaos" [even today].   The parable, or story that what actually happens  is a "condensation" of the possibilities that exist in chaos, also hangs together well, "In the beginning was the word ... God breathed on the waters ... etc".  But it is not the only story that we can tell.  That story expresses  RS's choice of his "spiritual world" over what actually happens, the former being source and the latter being felt as a mere "condensation" of it.  In my story it is pretty much the other way around ... but  i see no need to aug or favor either extreme ... but rather seek a balance between the chaos of possibility and its solidification into what actually happens.  That is the cusp on which i live my life.   The rest of the story is quite beyond my pay grade

what happens undetermines the stories which obtain … choosing a good one is what thinking does at its very best.

… and the story you just told about your not caring is a excellent case in point.
Yep – think I will switch to a different author – this one is getting boring.