I had a dream about this matrix.  It defines 4 spaces, (A, B, a, b), created by 2 egos interacting.  Each space has a specific context … it contains, as it were, certain things or spirits or processes.   This is another way of thinking about “Bozos Discovery”.

Some things can be read off of the diagram.   For you to visit a, or for me to visit b, we would necessarily have to leave out egos behind … or we simply could not go into those spaces or behold the things in those contexts.    By definition the same cannot be said about me visiting B or you visiting A.

What other things can we read off of this diagram?   For example the more my sense channels are practically closed down, the less i will know about the contexts in spaces A, B, or b.  That is the situation when i go to sleep. But i don’t think this matrix depicts egos in boxes at all.   Were i to depict that i would draw the ego as the box (not what is within the box) … it is that which stands between or separates the inside context from the outside context.

Does the box control what happens … or as you put it, “conduct and engineer the train of thoughts and the course of my life” ?   I guess you could put it that way.   Where is it?  well wherever i am … that is pretty obvious.
Mark de Los Angeles 2016-05-26 09:34:46 [item 20964#52358]
Whatever aug-U-meant – is whatever to confining consciousness & sheds little light on human communication & behavior.  I asked a better question.
Seth 2016-05-26 09:52:03 [item 20964#52361]
well recognizing that which separates the inside from the outside as “confining consciouness” certainly is understanding human communication & behavior … that is clear to me.   i certainly expect that your question feels better to you.   both of those are examples of what i call Bozos Discovery.
Yep, can’t get out of your box!  I ended up reading Pursuing Consciousness on my kindle waiting for an appointment at the clinic. Something always shows up when I read it that applies to the current circumstances & the following is no exception:

8: 12 Manipulation is what most people do most of the time. We speak or interact non-verbally for the purpose of producing some effect or reaction in the other person. We’re attempting to generate an impression or to alter another’s experience in some way that serves a purpose of our own. Recall some of your past interactions in this light and notice how much was actually not communication at all but simply verbal manipulation. No matter how innocently it’s done or how well-intentioned it seems, it is still a manipulation.

8: 13 Communication, on the other hand, is simply and honestly sharing an experience, period. The only motivation behind it is to get it across. The communication may provide information, or create understanding, or some such, but that is a result of the shared experience itself. It is not an attempt to indirectly handle your needs by creating some effect in the receiver. Can you see the distinction here?

Mark de LA says
The rest of the chapter is even more useful
Seth says
Mark de Los Angeles 2016-05-26 10:41:32 [item 20964#52367]
Another way of saying it … again … is you drew another map & made another model which see 20938 for mehr licht .
well yes of course i did draw another model and made another map.   no question about it.   such representations are part of how i understand things.   this one was a representation of something that emerged in an actual dream … which was far more detailed … which level of detail is yet too deep in my subjective private mind to manifest it in writings or graphics and may well be just random drama to titilate my feelings.   the part i did represent here i thought was tangeable enough that it could be shared by others.
Mark de LA says
Seth 2016-05-26 11:18:54 [item 20964#52371]
mark: the wallaby/metaphor of a train conductor navigating my mind which during contemplation seems to have many conductors was an interesting one to share & your wallaby at the time seemed to be a good or first place to park the train

yes certainly .   a different model from mine … might even be interesting to compare the two.   i am failure with that model as a Homunculus … a image of my being within my being. my model that you provoked by your comment was more of a sea urchin filtering morsels from water  … itself being the wall between inside and outside … and navigating and swimming that way.   that one seems to match my experience better.

no judgment however … its up to you to express yours better to me.  who knows, i might even notice that it matches better were it to have more detail.  what actual features can you read off of it?

Mark de LA 2016-05-26 11:22:53 [item 20964#52372]
There is no homunculus in mine! Must be in your model of what you think my model is.  I just got the train metaphor from the clutter beginning meditation this AM – so many partial conversations enticing my attention to continue along a train of thought.
Seth 2016-05-26 12:48:14 [item 20964#52374]
who is navigating the train?   if it is, as you say, the lur of “partial conversations”, then what agent chooses which ones get attention and determines where the train goes?  you called it the “navigator” … but in the language of philosophy such a navigator is a homunculus .. that is the way that word has been used … research it, i am pretty sure you will find what in my mind garnered that association.   not that there is anything wrong with it.   my only complaint with it is that it just kicks the can down the road … why not just say that “you” select what to pay attention to.   yet when the train goes in a direction, not of “your” choosing, who changed the track?
Nope! still no homunculus – see Wikipedia “A homunculus (Latin for "little man", plural: "homunculi"; from the masculine diminutive form of homo, "man") is a representation of a small human being. Popularized in sixteenth century alchemy and nineteenth century fiction, it has historically referred to the creation of a miniature, fully formed human. “  .. AC referred to such as something related to their sex magick.
I described what I used the train metaphor for above which stands sua sponte. 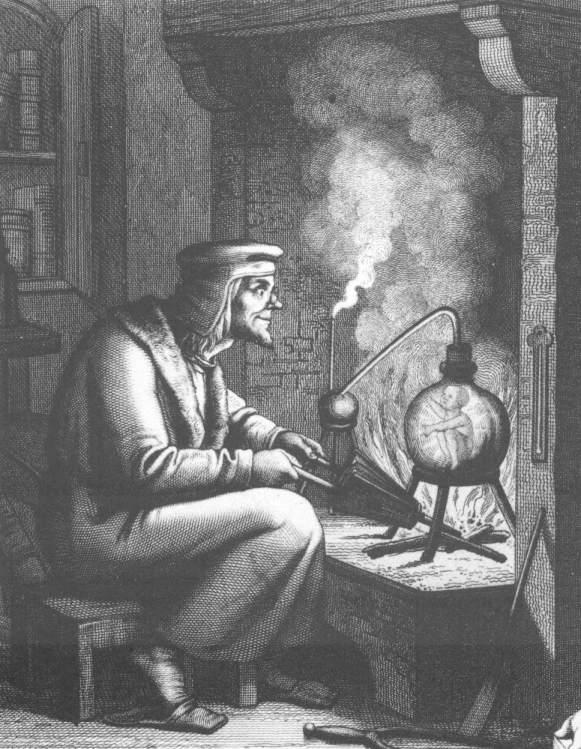 a more pertinent article in Wikipedia is the “Homunculus argument”.
see also the Turtles all the way down objection, bottom of article.

yet i am sure you can restate your model eliminating the objection.  i am just trying to provoke that clarification … to get at that which now remains deep inside you.
Again this has nothing to do with what I wrote but enjoy the glow of whatever you think you said & how brilliant you think you said it.

She should have died hereafter;
There would have been a time for such a word.
— To-morrow, and to-morrow, and to-morrow,
Creeps in this petty pace from day to day,
To the last syllable of recorded time;
And all our yesterdays have lighted fools
The way to dusty death. Out, out, brief candle!
Life's but a walking shadow, a poor player
That struts and frets his hour upon the stage
And then is heard no more. It is a tale
Told by an idiot, full of sound and fury
Signifying nothing.

Mark de LA says
Seth 2016-05-26 10:26:07 [item 20964#52365]
well you cannot get out of the box, because you are the box.  that is in the sense of “you” referring to your ego.   so it hangs together nicely to consider the ego as the box …  rather than something that is in the box.   it becomes even clearer (perhaps) if you behold a turbulent river … imagine a portion of the the river being contained in an imaginary box … now imagine the imaginary box disappearing.   It is clear to me that the stronger the actual box the more what is inside of it will be distinct from what is outside of it … the more it will survive as a coherent box inside the turbulent river.  that model holds together quite well and even matches with alan watts.

Pellick notwithstanding – it’ll be nice when comments can be moved as well. It is interesting that this showed up recently on Facebook after I wrote my own version of the train metaphor:

(from Peter Ralston)
Mark de LA says
Seth 2016-05-26 14:21:47 [item 20964#52394]
for me on aspect of mark’s “train metaphor” holds where thoughts are habitually connected to each other or even externally … for example: every time i take a shit i think of laying down … every time i think of an avocado, i think of an avocado sandwich … etc, to much more elaborate trains of thought.  and then too such trains interact to construct new ones, with may or may not take hold … if i think of an avacado while taking a shit, i might just think of eating a avocado sandwich in bed

Mark de LA 2016-05-26 14:27:53 [item 20964#52397]
Actually, Seth somewhere PR in that quote in section 8 of consciousness he describes what you are saying about habitual connections.  I on the other hand was speaking about such stuff in the mind what is begging for attention to follow & connect it verbally to yet another train and/or have a conversation.