Seth says
so i am to let nathan  take mark’s #RwgBait and then magnifiy it destracting my thought ?

#IDoNotThinkSo … that does not #RingsTrue  … the hide deed is #done! … just as my #integrity poem says.
Si says
This thought displays something I said out of context and changes it’s meaning. Please delete this thought. Thanks.
Seth says
okay.

My response to what you said in that context is above in Hiding distractions (comment 66676).

mark, do you believe that too?  If so, then what are you saying in this context?

If not, our ideas on the nature of art  seem  so different … how can we usefully talk about art to each other?
Mark de LA says
Because you folks have been #BackAndForth all over the place about it’s meaning. When I behold something artistic I rarely even need words to grock the art within see 22363.

Seth says
well in my experience, for meaning inside a person to get undersoood outside of person requires  just as very much #BackAndForth as is necessary for synchronous resonating (understanding) to happen .   It rarely happens the first time … especially with things that are truly deep inside.  The deeper the more #BackAndForth needs to happen.   Of course different media are quite different … and resonate differently ← sounds like a #MixedMedia topic.
Mark de LA says
Yep, that’s your thingy – take a poll to see if you can find the art in something.  Anyway it gives you something to argue & haggle & opine about.

← for later if something shows up here besides #EgoBait

Si says
I agree. Art is a direct experience, or it is just gossip. There is no in between. All the in-betweeer’s, the art critics etc, are not participating in art, they are participating about art … totally different thing.
Seth says
👍
Mark de LA says
XOR art is not #Binary
Mark de LA says

Vanity and pride are habits that must be overcome by the adept who would learn to keep silence. The emotion connected with these habits is the specific expression of the ego. The real master has destroyed his ego and is therefore conspicuous in his manifestation through the absence of this emotion with its concomitant signs and indications. The black brothers are just the opposite; they are incomplete masters, not having conquered the Demon of the Abyss whose chief peculiarity is that he can never keep silence.
C.F.R.  Silence – The Lightning Path (circa. 1931) (*)

Seth says
Well yes, as i keep my #egoo silent, it does not interact with others provoking theirs.

That is quite a different thing than having somthing deep inside for which there are no common words to express … and provoking others to interact with it so that it can become manifested in the world.

I do not think we should #munge those two quite different things together.

Mark de LA says
Perhaps (or NOT) that is why direct experience is so elusive – there is a chatterbox in the mix.
Seth says
Well the experience is not the communication of the experience.   Communication always requires interaction with others … er, else it is not communication.   In that context, what are you saying?
Mark de LA says
XOR – maybe not – interaction like mass volumes of twits on twitter is often only one-way – the sound of one hand clapping. #OneFingerClapping
Seth says
👍
Seth says

well it is certainly true that a lot of what happens on twitter is like “one hand clapping” … no interaction at all.

I call not interacting, not communicating … and visa versa.

No “maybe not” about it.

But you did not answer my direct question in Hiding distractions (comment 66705).


Mark de LA says
How observant! & maybe I did & you didn’t like the answer
Seth says
Well i guess then we need to interact about it untill there is a communication between us … that is if both of us care.   You sited a case where that was no interaction, which i grant.  So i am saying then, in that case there was no real commnication.  At least not on the level we are talking about here.  Mostly i think that is just the first type that we discussed above, “#egoo proviking #egoo”.    An excellant example tweet, me thinks, is given below.

But we are talking about the second type … where something deep inside one is communicated to another by them interacting together.

Our wonderful future V.P. Mike Pence was harassed last night at the theater by the cast of Hamilton, cameras blazing.This should not happen!

Seth says
maybe that is why nobody can communicate to you … and you cannot communicate to others.  just because you believe that all communication necessarily is of the first type … “#Egoo provoking #Egoo”  for which the #PowerOfTheSpinx is recommended.
Mark de LA says
XOR you are just lying  #gossiping about another ← why I like silence more.
Seth says
Hiding distractions (comment 66713) is more like theorizing than gossip.

my theory, matches my experience with you over here.

i am asking you, objectively, to tell me where it does not match with your experience over there.

Mark de LA says
Maybe seth you just #SuckShit for listening skills & can only hear your own #chatterboxes .
Seth says
i guess that could be the case … or as you say, “maybe”.  What evidence do you have that obtains outside of your own mind?  Can you establish match points about that theory with another?  with me?   Can you name the place that we both can visit about that?

If not, then must we not consider it to be of the type of transaction “#Egoo provoking #Egoo” ? 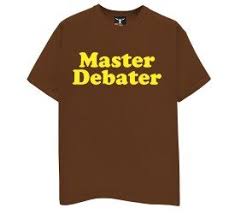