About: Spirituality and Truth

All things are subject to interpretation. Whichever interpretation prevails at a given time is a function of power and not truth.
– Friedrich Nietzsche

Can’t yet prove that is the quote from the article. (see (*) and (***) – ¶ 6 at the end)
An introduction of the “Post-truth 2016” meme seemed a bit specious. The G+ author’s article is peppered with anti-Trump pellick. Maybe later we can extract the jist of what Nietzsche was actually saying.
God is Dead/Alive is irrelevant; like “How many somethings/nothings are there?”
Nietzsche is talking politically like he who said: 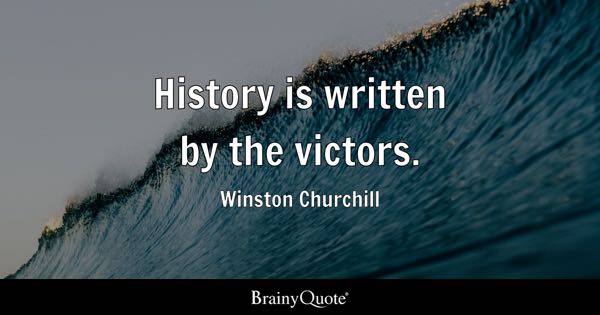 Maybe more to the point: (from PR)

Si says
I agree that much of the article is suspect and biased … which simply means primarily from a source outside my verse, but this #RingsTrue.

Nietzsche, German counter-Enlightenment thinker of the late 19th century, seemed to suggest that objective truth – the concept of truth that most philosophers relied on at the time – doesn’t really exist. That idea, he wrote, is a relic of an age when God was the guarantor of what counted as the objective view of the world, but God is dead, meaning that objective, absolute truth is an impossibility.

He writes that the reason is God is dead. That seems like simple sensationalism to me (basically I agree with mark). I would not hesitate to say that the reason, understood conventionally, is that we are each made in God’s image.

God is the grantor of the objective view of the world.
We are each made in God’s image and God is in each of us.
Therefore, each of our perspectives must be equally true.
dA

Mark de LA says
The timeline thingies ¶s were fun to play with.
Si says
Acknowledging your work.
Mark de LA says
👍
Seth says
👍
Mark de LA says
In surveying the entire spectrum of being from the tiniest grain of sand through the single celled paramecium; plants & mushrooms & trees; cows & lions etc.; all the way up to mankind & beyond the visible & below/above it from the elementals to the angels & beyond (see Book K & Liber M) – use your own lingo if you don’t like GW’s & RS’s.
It is hard to find God; although Liber M spells it out.
I submit that god is a word applied to any being of more power,love,creative ability,strength, etc than the human contemplating such. Some think the president is such, from their limited viewpoint. Others collectively assign the name to everything & the cosmic ALL. Most use it as an undifferentiated pointer to a creator of the Cosmos.
God is dead or alive makes no sense.
Interesting side note in pursuing protozoa I found a possible clue to #pellick which is in the Wikipedia under protozoa in the paragraph on pellicle :

The pellicle is a thin layer supporting the cell membrane in various protozoa, such as ciliates, protecting them and allowing them to retain their shape, especially during locomotion, allowing the organism to be more hydrodynamic. The pellicle varies from flexible and elastic to rigid. Although somewhat stiff, the pellicle is also flexible and allows the protist to fit into tighter spaces. In ciliates and Apicomplexa, it is formed from closely packed vesicles called alveoli. In euglenids, it is formed from protein strips arranged spirally along the length of the body. Familiar examples of protists with a pellicle are the euglenoids and the ciliate Paramecium. In some protozoa, the pellicle hosts epibiotic bacteria that adhere to the surface by their fimbriae (attachment pili).

Henceforth maybe I can define #pellic as a sort of sausage of pellicles . Seth says
👍
Mark de LA says
Yep, thanks, normally I remove external links from my Wikipedia quotes.
Seth says
#hmmm … well every being has a membrane between its insides and its outsides.   That membrane stretches into as many dimensions as one can be aware ← #MyTheory.  For a parmesian that theory seems to hold as to how many dimensions biology is studied publically in our current culture.   I see no reason why it would not extend all the way through human beings.

#thanks → mark for calling my attention to that as worded here.

Seth says
Well in this case i think it actually removes some steps.   At least if we were to become active Wikipedia editors … which me thinks would be an excellant idea

.  So then if one copies from the page that can be edited, then to correct the story over there we are just a click away.

tag #WikipediaEditing #wikipedia
Mark de LA says
Well that is one way of looking at it.  I say that making a distinction is a fundamental mental process & context is part of it, but is also a distinction.
Inside cells there are genes & DNA which have living functionality. Inside there are many parts organelles & on & on. To say that inside/outside is the most important distinction ignores other hierarchies of parts.
Mark de LA says
I started to play with editing – didn’t need to sign in etc. If just anyone can edit then we are getting into fake-news, fake-information, fake-science, fake-climatology, fake-authority ….. etc.
Seth says
👍
Mark de LA says
BTW, is a parmesian something like a theory of cheese?
Seth says
bear in mind that there are many dimensions of any context … not just the ones you mention above in which DNA molecules are measured to be inside the being.   It is those other dimensions that allows us to use this inside/outside model to apply to even the most spiritual contexts of being human.
Seth says
well i do believe that somwhere in the process they will record your identity … even if you want to be anonymous.

It is the principle of Wikipedia … has been from the start … that any body whoever can edit.  No  power trip being played on who can edit …  ever … no authority is granted to anybody.     It is a process which governs itself.   Notice the robust accuracy and reliability it has given us.

Mark de LA says
You can take DNA outside a cell & it is still DNA. There is also interpenetrating architecture like water in a sponge or air being breathed into/out-of a lung where the boundary is fluid. Although the body-soul-spirit of a human is at one – distinction can be made & understanding evolves that the differentiation informs.
Mark de LA says
One of the most fluid is warmth. Can’t draw a surface around warmth.
– & some people cant draw one around a thought.
Seth says
Absolutely you can take a strand of DNA outside of a being,  just like we can communicate our thoughts outside of ourselves.  But that instance of the thingey which is now deemed outside,  no longer contributes to the exact particular being from which it sprang … instead it is outside doing whatever it does in its new surrounding.

For example if we take a copy of a DNA molecule from a protozoa  SpecimanNumber12988746588754875 (let’s call it “Bill” for short), then Bill may go on being Bill and what happens to the molecule he spawned may well be totally irelivant to Bill’s life.   I could descibe a person’s thought the very same way.

The flow of warmth permiates membranes just as it does according to the quality of the membrane.  In 5 dimensions, {X,Y,Z,T,W},  that is well described by thermodynamics.  Add what you might call “spiritual dimensions” and i predict that my inside/outside/being model will still hold.


Mark de LA says
👍
Mark de LA says
Well I actually took physical chemistry & thermodynamics at UCLA. Warmth is a function of the movement & collision of molecules . You may find it difficult to draw a surface around one in a room full of molecules – try it & let me know when you get  finishing it. Beyond some physical extensive properties one wonders & wanders off into the conceptual & imaginary.
Seth says
Heat will flow throught a membrane just according to the nature of the membrane.  For example,  if it is made of rubber, then much less heat will flow throught it than if it were made of gold.

There in no implication in my model that #thingey’s do not flow from inside to outside and from outside to inside.   So I have no idea how you think you are giving an example that breaks my model.

Mark de LA says
You are proving my point you can’t confine the heat, (no perfect heat insulator) hence you can’t make a surface around it & define inside & outside. Inter-penetration AND inside/outside & other geometries inform my models.

Seth says
Okay … then we are in agreement.   All membranes are porous in some contexts to some degree.  And, skipping ahead, they are also expandable and contractable … not to mention all other manner of interactions with other (reference tbd).    I had thought that was already understood as common knowledge.
Mark de LA says
XOR your membrane around your selfie or Ego is?
I’ve already crisped up my distinctions #AcceptAndMoveOn

Seth says
Well yes what we refer to as a person’s #ego is in fact a membrane that separates them from what they are not.   Hopefully, and obviously, my inside/outside model of being #informs such a thought.

But the meaning of your question above escapes me.

Mark de LA says
You are using imagination to create a membrane around your Ego. #AcceptAndMoveOn
Seth says
Not at all.  My belief (story, theory) that “my ego” names a membrane that separates me from what i am not is just a story or a thought.  That is my map of what is happening.  What is acutally happening is the territory and is probably not #informed by  my map at all.

So no, i do not imagine that i am creating my #ego as a #membrane by thinking about it as you seem to suggest that i am doing.  That would be the classic error we all have talked about so very much here.

That is what the movie Synchronicity on Netflix is about. I watched it last week. So of course you guys are talking about it now.

Very cool ending … reminds me of a story I have been in too!