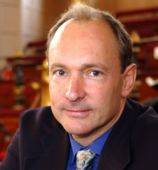 That's Sir Tim Berners-Lee to you.


source: quoting his second post
Oops! Thanks for all the wonderful welcoming comments. We've had rather a lot, and had to turn the comments off on the first blog. I can't answer them all, but I would point out one thing. I just played my part. I built on the work of others -- the Internet, invented 20 years before the web, by Vint Cerf and Bob Kahn and colleagues, for example, and hypertext, a word coined by Ted Nelson for an idea of links which was already implemented in many non-networked systems. I just put these technologies together. And then, it all took off because of this amazing community of enthusiasts, who have done such incredible things with the technology, and are still advancing it in so many ways.

By the way, this blog is at DIG, the Decentralised Information group at MIT's CSAIL. I intend it to be geeky semantic web stuff mostly. For example, it won't be for W3C questions which should really be addressed to working groups.

So thanks for all the support, no need for more general 'thank you' comments! Thank *you* all.
Keep them comming Sir Tim, you can us good insight into this web process thingy that you invented

Seth says
as he says this, url http://www.w3.org/DesignIssues/, is his old blog.
Seth says
More about Sir Timbl blogging at burning bird.

Mark de LA says
I like the "news" navigation by calendar.  Maybe the wizzard

can get Tim to do a log or two on FastBlogIt