ChickenLittle says
Let the Liberals in Congress defund the patriot act that they voted for & show the American People where the liberals stand before the election.  There has always been a polarity between the Congress, the Executive & Judiciary branches on which branch has the final say on what the laws mean & what actually gets implemented.  This is a good example.

There has always been a polarity between the Congress, the Executive & Judiciary branches on which branch has the final say on what the laws mean & what actually gets implemented.  This is a good example. 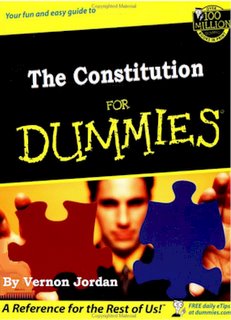 May i suggest some reading for you.  The Judicary branch does have the "final say on what the laws mean" period.
Mark de LA says
May I refer you to some Judicial History in which the Supreme Court was NOT ALWAYS the arbiter of what the law meant. They took it upon themselves see commentaries on Marbury v. Madison a well known & sometimes discussed precedent of the law circa 1803. See also this piece uri http://www.uncommonknowledge.org/800/822.html if you want to get beyond a sound byte or conventional wisdom.  Liberals would like you to believe that courts are the end of the discussion - thus they only have to persuade 9 court justices instead of the represented population.  It is actually the government of the people, who stand for election & are responsible thereto, in the form of Congress that make & say what the laws contain.  Do you actually want just 9 old (men & 1 woman) to make the laws for all of US ?If the Executive branch was suddenly to say what was & wasn't law you would scream (& indeed you imply that with your post).  So far they have not used the army to back themselves up!

If the Executive branch was suddenly to say what was & wasn't law you would scream (& indeed you imply that with your post).  So far they have not used the army to back themselves up!

All i (and others) am becomming aware of is that this president is pushing the envelope. I don't like it.  The president above all others should hold to the law.  Pushing that envelope is for the people through civil disobedience.   We have allowed 911 to excuse the perversion of what is the rightful (and constitutional) duty of the execuitive long enough. It is now time to push back.
Mark de LA says
source: ... Article II, Sections 2 to 4
Section 2. The President shall be Commander in Chief of the Army and Navy of the United States, and of the Militia of the several States, when called into the actual Service of the United States; he may require the Opinion, in writing, of the principal Officer in each of the executive Departments ....

Bush has done nothing unusual when compared with Clinton, Bush 41, Reagan, Carter & all the rest. You might refer yourself to the Gulf of Tonkin Resolution that brought upon us the Viet Nam War & the loss of 58,226 troops. There was something similar that was made by congress after 9-11.  Wars evolve. We have one now that is quite different from our own Revolutionary War. The enemy no longer march in a straight line with Red Coats on.  The enemy is hard to distinguish from our own people in this plurilistic & open society. I would like to know what a practical liberal solution to the terrorism threat looks like besides besides sounding the bugle call for retreat!

Mark de LA says
Pushing the envelope in defense of FREEDOM is AWESOME !

Pushing the envelope in defense of FREEDOM is AWESOME !

Your Newspeak is showing

& BLACK IS WHITE & THE MOON IS GREEN CHEESE! - GET REAL
Mark de LA says
I wonder who thinks the media is to be believed either:
Gallup: Public Confidence in Newspapers, TV News Falls to All-Time Low

NEW YORK Public trust in newspapers and television news continued to decline in Gallup's annual survey of "public confidence in major institutions" in the United States, reaching an all-time low this year.

However, some other institutions fared far worse this year, suggesting a broad level of distrust, cynicism or malaise.

Confidence in the presidency plunged from 52% to 44%, with Congress and the criminal-justice system also suffering 8% drops. Confidence in the U.S. Supreme Court fell from 46% to 41%. The 22% confidence rating for Congress is its lowest in eight years, and self-identified Republicans have only a slightly more positive view of the institution than do Democrats.

The military topped the poll with a 74% confidence rating, with the police at 63% and organized religion at 53%. Big business and Congress (both at 22%) and HMOs (17%) brought up the rear.

Looking at the newspaper numbers, of those surveyed, 24% say they have "very little" confidence in them, while 1% said "none." By far the highest number, 46%, said "some," with 28% expressing strong confidence.

Seth says
Should a president be allowed to stand above the law? ...

But, Leahy said, because Bush's fellow Republicans control Congress, Democrats have no power to call hearings on Bush's attempt to ''pick and choose which laws he deems appropriate to follow."

''Just as disturbing as the president's use of press releases to announce which laws he will follow is the abject failure of the Republican-controlled Congress to act as a check against this executive power grab," Leahy said. ''Until Republican leaders let Congress fulfill its oversight role, this White House will have no incentive to stop this abuse of power."
...

Mark de LA says
This is just old shit - nothing new here. Assertion that Bush broke the law is just "sea lawering" - no matter how many mice you put in your back pocket so that you can say "we" !