source: Andrew Greeley of the Chicago Sun Times wants us to believe that ...

The United States is caught up in a new campaign for a military dictatorship -- rule by a military chief with absolute power. The White House, inspired by Vice President Dick Cheney, has argued that in time of great danger, the president has unlimited powers as commander in chief. If he cites "national security" he can do whatever he wants -- ignore Congress, disobey laws, disregard the courts, override the Constitution's Bill of Rights -- without being subject to any review. Separation of powers no longer exists. The president need not consult Congress or the courts. Moreover the rights of the commander in chief to act as a military dictator lasts as long as the national emergency persists, indefinitely that is and permanently.
I've listened to Cheney and to tell you the truth he scares the shit out of me.  He scares me far more than the terrorists.

Mark de LA says
BTW, if you really want to know what he thinks read the info on his official website here. Here is even a better picture than this probably photoshop one posted.  Otherwise stew in your own smugness 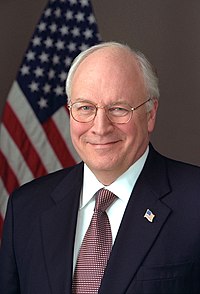