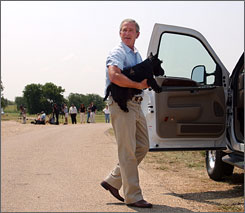 ... in an interesting contrast between Blair who delays holiday in bid to help resolve Lebanon crisis.

I guess we all have our prioities.

Mark de LA says
Nice attempt to smear with innuendo etc.  He is supposed to meet with Condi Rice there on a working vacation. It's not like he can't be back in Washington DC anytime he wants. (Got own jet!) . Match that with how many lawmakers are MIA till the end of the election . Anyway, there is nothing worth doing in DC & one has to get rid of the stink of the left to catch one's breath.

Seth says
Like i said, we all have our priorities.  There is no doubt that the Palestinean issue has been very low on Bush's adgenda ... you can find evidance of that all over the place ... here is one place ...

source:  Global Exchange
Bush's chronological attempts to address the crisis are as follows: ignore the conflict - failed, send Powell to the region - failed, the Mitchell Report - failed, the Tenet Plan - failed, Bush's UN speech - failed, Secretary of State Powell's policy speech in Kentucky - failed, send General Zinni on multiple missions - failed, and the most recent call for an international conference (completely ignored in Bush's latest speech) - failed. If the creativity applied to avoiding real U.S. action were used to put an implementation mechanism in place to end the Israeli occupation the region would be well out of the conflict by now.
The time has come to dog the 2-state solution until it happens.  Blair gets that.  Bush does not.

Mark de LA says
I guess Seth's friend Tony Blair 4076 takes vacations too! So they both have telephones & modern communications , ya think ? see: this article.