About: george f. will - 'a dissident of islam' - washingtonpost.com

Maybe Murder in Amsterdam would be a worthwhile read ! This woman sounds inspiring! 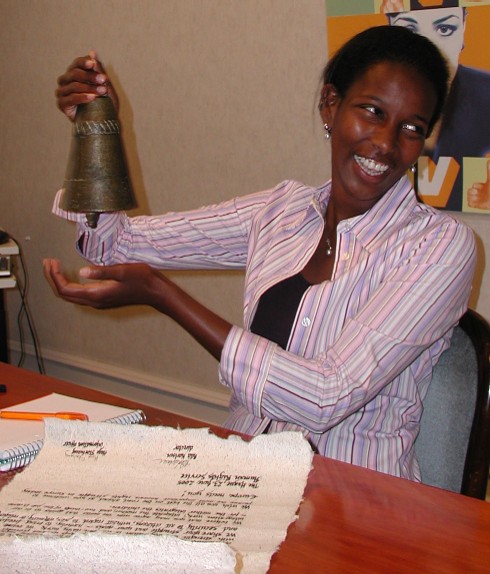 source: ... She wrote the script, and filmmaker Theo van Gogh directed, "Submission," an 11-minute movie featuring pertinent passages from the Koran (such as when it is a husband's duty to beat his wife) projected on the bodies of naked women.

It was shown twice before Nov. 2, 2004, when van Gogh, bicycling through central Amsterdam in the morning, was shot by an Islamic extremist who then slit his throat with a machete.
...

Mark de LA says
Apparently the meaning of the word ISLAM is submission!  What do you think of that ?

Part of the movie Submission can be seen here.
Apparently you can see the whole movie here at google.

Apparently the meaning of the word ISLAM is submission!  What do you think of that ?
... submission to Allah.  Why do you think i went looking for images of humility the other day.
Mark de LA says
Apparently she has written a book called Infidel.   She appeared on Genn Beck's TV program last night. I haven't had time yet to review the recording.
Mark de LA says
Fred Thompson opines in NRO today about Ali's book Infidel
source: ... There were many Germans and other Europeans who came to America and warned of the Nazi threat in the 1930s, including writers and filmmakers. Can you imagine that any of them would have ever needed bodyguards?

source: ... A leading critic of Islam reportedly has been forced to leave the U.S. because American authorities will not finance her personal security.
... - I'm not shure from the article why private sources would not do it. Here is some interesting dialogue from the article:
source: ...

"Islam means submission to the will of Allah, a doctrine that requires from the individual to become a slave," Ali told Lewis.

Islam, she said, "keeps people backward" by limiting their imaginations to what can be found in the Quran and the example of Muhammad.

Lewis retorted: "Surely there are many versions of Islam, like there are may versions of Christianity or Judaism, of all major religions. You are presenting it as one thing, and it's just obviously not."

Ali replied: "Islam, as a faith, as a doctrine, defined by what's in the Quran and the example of the prophet Muhammad


Brandeis University in Massachusetts announced Tuesday that it had withdrawn the planned awarding of an honorary degree to Ayaan Hirsi Ali, a staunch critic of Islam and its treatment of women, after protests from students and faculty.

The university said in a statement posted online that the decision had been made after a discussion between Ali and university President Frederick Lawrence.

"She is a compelling public figure and advocate for women's rights, and we respect and appreciate her work to protect and defend the rights of women and girls throughout the world," said the university's statement. "That said, we cannot overlook certain of her past statements that are inconsistent with Brandeis University's core values."

... If she were a Christian bashing Christianity it would probably have been OK - imho.
The other side of the story is here.