Accessing The Threat of The Islamic Army's Abeer Missile

source: Aljazeera.Net
Iraq's Islamic Army has claimed that it has produced a surface-to-surface missile. 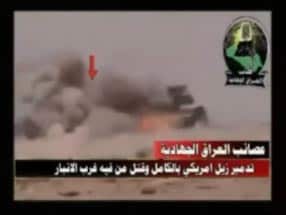 The questions are:
(1) What is the Iraq's Islamic Army?(2)  Where did they get their missile?  Did they make it themselves?
(3) Is it a practical wepon or a propoganda myth?
(4) What is it's capabilities?

This is a military fact finding node, it is not about politics; except, of course, to establish the identity of Iraq's Islamic Army.

Seth says
Note that this node is just a bit ahead of Western main stream media news coverage. It might be that this so called "Islamic Army" is primarially a propoganda invention, and the media chooses not to lend crediance to the group. More PC in the west to just call it the "insurgancy". Be that as it may, i like to know about this before it hits the MM.
Seth says
M 2006-11-03 09:40:41 4856

Some of those pictures look like they were done in a laboratory or a high school science lab. They look very small.
Did you watch the movie?  It is actually very convincing.  I imagine that military intelligence is dysecting it in detail.
Seth says
source: Neil Doyle note the date of this posting:  Posted by: Neil on Saturday, July 15, 2006 - 05:47 PM
The Islamic Army in Iraq has released a video showing a series of missile attacks against US forces. The video includes a claim that the group fires an average of nearly 250 missiles a month.

Looks scud like to me. Wasn't that the same sort of shit that Hezbollah was throwing at Israel?
Possibly, but i don't think that Hezbollah manufactured it ... i though they got it from Iran.
Seth says
a fertile search.
Seth says
This bears on the identity of the group in our inquiry ...

source: Jihad Unspun
The Islamic State of Iraq and its Ministry of Information was established to protect the Sunni Iraqi people and defend Islam under one unified group, The Mutayibeen Alliance. It is composed of a many different Mujahideen groups and tribal leaders including the Mujahideen Shura Council in Iraq, Jaish al-Fatiheen, Jund al-Sahaba, The Brigades of al-Tawhid Wal Sunnah and other Sunni tribes and has formed an Islamic state that includes parts of Baghdad, Anbar, Diyala, Kirkuk, Salah al-Din, Ninawa, and parts of Babel and Wasit under the leadership of Abu Omar al-Baghdadi.

Seth says
Before you take information comming from the Jihad Unspun website as comming from the horses's mouth, read Disinformation: CIA Posing as Al-Qaeda.
Seth says
source: source: theage.com.au
The video appeared to be part of a new profile-raising media strategy by the Islamic Army in Iraq, one of the larger Sunni Arab factions battling US forces and their allies in the Iraqi government. It's fighters are believed to include former members of Saddam Hussein's Baath Party, his intelligence service, and former army officers.
...
Boaz Ganor, an Israeli anti-terror expert, said the Abeer appeared similar to the inaccurate, homemade Qassam rockets that the Palestinian group Hamas regularly lobs into Israel.  "With homemade missiles of this type the changes of hitting a particular, specific target are virtually zero," Ganor said.

The thing I haven't figured out is why the Turks don't get involved. They are 90% Sunni.
I don't get it ... how is that related to "Accessing The Threat of The Islamic Army's Abeer Missile" ?
I lept ahead.  Saddam's party were mostly Sunni. They are the minority. They are the ones who seem to be formenting a large part of the insurgency & stirring up a civil war. But, there is a great mass of Sunni in Turkey, so .... it's another factor in the mix.
Yep this seems, on it's face, to be all about Sunni.  Which kind of excludes a Iranian/Shia supply line.  Me thinks, the Egyptians, where more radicals are located, is a likeley supply line.  Of course, we have the ever present largess of the Saudi always anxious to support a Wahhabi based group.  The Turks don't seem to come up that very much ... i'm not sure why ... maybe because their government is securly in the NATO/US court.

Me thinks the essence of what is happening here is the emergence of low-tech home grown manufactuer from easily available materials. If this becomes practical, then shutting off supply lines, like Israel is attempting to do in Gaza and did in Lebanon, will no longer work.  I suspect that Isralie and US intelligence are delving into this with great interest.