What is happening to the bees?

About: Declining honeybees a

I've been following this story for a couple months now. Very troubling news and I'm sure R. Steiner would agree. Perhaps an even more immediate problem than "global warming"...?

On the flip side, while gardening this weekend, I noticed plenty of honeybee activity in the flowering plants around our vicinity. Exactly where is the epicenter (if there is one) from which this 'sickness' might be spreading? 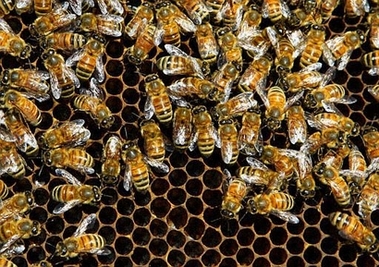 "About one-third of the human diet comes from insect-pollinated plants and the honeybee is responsible for 80 percent of that pollination, according to the USDA."
More here.

Mark de LA says
The last article I read said nobody had found the missing ones. I think it was Florida. Anyway there are a bunch or articles in Google News on the subject. I think the latest fad is to blame it on the cell phones.  I got this article fron New Scientist:

Are cellphones wiping out bees?

The bizarre and sudden vanishing of bees that started in the US, and has now spread to Europe, has left apiarists stumped as to the cause. Now, researchers in Germany have come up with an explanation that, in the absence of a better theory, will probably be seriously considered : cellphones.

Radiation from mobile phones is interfering with bees' navigation systems, preventing the insects from finding their way back to the hive, according to a preliminary study by Jochen Khun's team at Landau University in Germany.

If it is true, it's difficult to know what can be done about it, since cellphones are now so ubiquitous. But colony collapse disorder (CCD), as the mystery bee demise is known, is a serious problem, with as many as 80% of bees affected in some parts of the US. It occurs when all the hive's occupants suddenly disappear (nobody knows where) leaving just the queen, her eggs and a few immature workers. And it has huge implications for agriculture because bee-performed pollination is vital for most of the world's crops.

Previous studies have shown that bees' behaviour changes near power lines, although the areas around power lines also provide an untouched haven for the creatures.

Seth says
M, apparently copy paste from a Google notebook does not preserve images that are nolonger at the referenced URL.  Here is the New Scientist story and here is the picture.

Here is the most tangeable speculation re the cause that i have been able to find ...

source: CNN
USDA's top bee scientist, Jeff Pettis, who is coordinating the detective work on this die-off, has more suspected causes than time, people and money to look into them.

The top suspects are a parasite, an unknown virus, some kind of bacteria, pesticides, or a one-two combination of the top four, with one weakening the honeybee and the second killing it.

A quick experiment with some of the devastated hives makes pesticides seem less likely. In the recent experiment, Pettis and colleagues irradiated some hard-hit hives and reintroduced new bee colonies. More bees thrived in the irradiated hives than in the non-irradiated ones, pointing toward some kind of disease or parasite that was killed by radiation.

The parasite hypothesis has history and some new findings to give it a boost: A mite practically wiped out the wild honeybee in the U.S. in the 1990s. And another new one-celled parasitic fungus was found last week in a tiny sample of dead bees by University of California San Francisco molecular biologist Joe DeRisi, who isolated the human SARS virus.

However, Pettis and others said while the parasite nosema ceranae may be a factor, it cannot be the sole cause. The fungus has been seen before, sometimes in colonies that were healthy.

Mark de LA says
Here is a bit of paranoia for you.  One of Bin Laden's former sources of money besides construction was bee keeping & honey. Maybe there is a connection.
Seth says
There is a working group ...

source: Colony Collapse Disorder (CCD) Working Group:
To better understand the cause(s) of this disease and with the hope of eventually identifying strategies to prevent further losses, a group of researchers, extension agents, and regulatory officials was formed. This group represents a diverse number of institutions including Bee Alert Technology, Inc. (a bee technology transfer company affiliated with the University of Montana), The Pennsylvania State University, the USDA/ARS, the Florida Department of Agriculture, and the Pennsylvania Department of Agriculture.
... lots of names in here of scientists working on the problem.   At Mid-Atlantic Apiculture there is some more information on CCD and i found the map below of the affected states ...

There is a working group ...

source: Colony Collapse Disorder (CCD) Working Group:
... lots of names in here of scientists working on the problem.   At Mid-Atlantic Apiculture there is some more information on CCD and i found the map below of the affected states ...
Thanks very much for the CCD group link, . It appears by the map it is a widespread problem. But who's to say if this is the first time it has occured. Perhaps we just noticed it or it is more pronounced this time around.
I tend to think that the parasite/fungi hypothesis is somewhat correct. Interestingly enough, I see the CCD group has a podcast, which I am going to listen to now. Should be some interesting discussion, I'd hope, since scientists are involved and perhaps they will approach the issue on an even field.
Mark de LA says
M 2007-05-03 21:33:57 7077

Here is a bit of paranoia for you.  One of Bin Laden's former sources of money besides construction was bee keeping & honey. Maybe there is a connection.
Naw, methinks his bees were primarily there to pollinate his crop of opium poppies!

Seth says
Sharon Labchuk reports no Organic Bee Losses check out her site.  Yesterday i though i observed a large bee behaving badly in the woods but i'm not sure.
Seth says
Some interesting, perhaps even pertinent, comments about Sharon Labchuk here url http://reddit.com/info/1psmx/comments