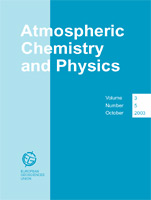 source: Atmospheric Chemistry and Physics
Our conclusion that global temperature is nearing the level of dangerous climate effects implies that little time remains to achieve the international cooperation needed to avoid widespread undesirable consequences. CO2 emissions are the critical issue, because a substantial fraction of these emissions remain in the atmosphere "forever", for practical purposes. The principal implication is that avoidance of dangerous climate change requires the bulk of coal and unconventional fossil fuel resources to be exploited only under condition that CO2 emissions are captured and sequestered. A second inference is that remaining gas and oil resources must be husbanded, so that their role in critical functions such as mobile fuels can be stretched until acceptable alternatives are available, thus avoiding a need to squeeze such fuels from unconventional and environmentally damaging sources. The task is to achieve a transition to clean carbon-free energy sources, which are essential on the long run, without pushing the climate system beyond a level where disastrous irreversible effects become inevitable.
This study has also been reported by ABC news here.  The report hints that the world may be near a tipping point where a dangerous feedback loop could start.

The highlighted passage is of concern to us today because there is a bill on the table which grants incentives to build coal-to-liquid plants.  James T. Bartiste of the Rand Corp testified before the Senate Energy and Natural Resources Committee on May 24, 2007  that "If no provisions are in place to manage carbon dioxide emissions, then the use of coal-to liquids fuels to displace petroleum fuels for transportation uses will roughly double greenhouse gas emissions."  He then offers some options for managing greenhouse gas emissions.  However there are reports that the  bill provides that plants need only be capable of carbon capture rather than requiring them to do it.  We need the bill to require a minimum level of GHG emissions.

Mark de LA says
I suspect that your picture was more for effect than anything produced by NASA; probably similar to my 5453 .  The climatologists, meterologist, NASA & anyone interested in leveraging more money from the taxpayers (including your friend Algore) for job security have created the urgency you feel & your inability to recognize the natural changes of the Earth. Past urgencies have faded away & new ones are created by the political class each day to sell you yet one more government plan after another.  Government rarely solves anything. By the time a tax dollar reaches the actual solution provider it is more like 10
Seth says
M 2007-05-30 12:16:23 7435

I think cooler heads may prevail in WFB's article. It's mostly politics. Clinton put the largest coal reserve in the country (UTAH) off limits so his Indonesian buddy would have less competition. I still say new sources for energy that do not require burning anything would be the best. We DO need to survive as a nation until then. Economics is part of that survival. Not being held hostige by the Middle East is another part of that survival. Not polluting the atmosphere & ground water is another etc.
source: ... We need great, human capitalized ingenuity. Politically, we need to discourage the heavy hand of government on progress. And this means not only the big government of Washington, which can deny us nuclear development, but the small governments here and there that write zoning laws that prevent drilling, or block refineries, or sequester outsized preservation areas.
...

the red part says it best.

Well i think the NASA scientist who published this article have very cool heads.  WFB's is usually pretty cool as well but his emphasis here may be a bit of misplaced.  The scientist are telling us that we are rapidly approaching a problem that laissez faire capitalism will fail to address in time.  But governments can impose requirements and provide incentives to force a faster solution.  In this case a reqirement that liquifying coal plants do not emit more GHG than oil refining would seem to be indicated.
Seth says
Please spend a bit of time studying the actual science reported here by NASA or the nature of the legislation under consideration if you want me to value your opinions ... otherwise you are just reciting talking points that i have heard many times before and not contributing anything pertinant to the conversation ... ask yourself whether there is any new knowledge contained in your message that might inform the particular topic.
Mark de LA says
Here is a theorem for you:
The need for government is directly proportional to the number & degree of severity of perceived crises. A corollary is that government diminishes it's value directly proportional to the degree of contentment & satisfaction of the people.
Mark de LA says
O, are you doing some science or repeating others' opinions be they scientists or politicians?
Mark de LA says
Look for NASA's Griffin to get fired because he asks thoughtful questions & doesn't toe the religious line of the Global Warming Tipping Point alarmists.
source: ... "To assume that it is a problem is to assume that the state of Earth's climate today is the optimal climate, the best climate that we could have or ever have had and that we need to take steps to make sure that it doesn't change," Griffin said. "I guess I would ask which human beings
Seth says

Look for NASA's Griffin to get fired because he asks thoughtful questions & doesn't toe the religious line of the Global Warming Tipping Point alarmists.
source: ... "To assume that it is a problem is to assume that the state of Earth's climate today is the optimal climate, the best climate that we could have or ever have had and that we need to take steps to make sure that it doesn't change," Griffin said. "I guess I would ask which human beings " where and when " are to be accorded the privilege of deciding that this particular climate that we have right here today, right now is the best climate for all other human beings. I think that's a rather arrogant position for people to take."
...

. Notice how the rest of the article is alarmed at his words.  The thought police will get you some day!

Well today he apologized as follows ...

source:msnbc
NASA administrator Michael Griffin said in the closed-door meeting Monday at the Jet Propulsion Laboratory in Pasadena that "unfortunately, this is an issue which has become far more political than technical, and it would have been well for me to have stayed out of it."

"All I can really do is apologize to all you guys.... I feel badly that I caused this amount of controversy over something like this," he said.

Mark de LA says
Yep, that was predictable. Too bad, what he said was reasoned & thoughtful.  I just knew that the religious left couldn't stand for a heretic of it's religion.
No guts, no glory.  Too bad he copped out.