A Scary Attitude From The Chief Law Enforcing Officer

source: Boston Globe
Federal officials have disobeyed at least six new laws that President Bush challenged in his signing statements, a government study disclosed yesterday. The report provides the first evidence that the government may have acted on claims by Bush that he can set aside laws under his executive powers.
I don't know about you, but this scares me

My evaluation of your details is simply that is is mostly a turf war. Executive vs Legislative. Bush has only vetoed one or 2 bills. Instead, he seems to prefer to write memoranda of understandings to ameloriate the differences. He could continue to send them back (as in the Iraq War funding case until Congress gets something he is willing to sign or a 2/3 majority - whichever comes first) If congress doesn't like the memoranda, they can always come up with a special bill spelling out what they don't like & concurrently come up with a 2/3 majority to override a veto. I think that so far things are working as best government can come up with. It's the partisans that want to dig up this several month ago story & beat the drums for political purposes.
Well sure you can view anything that happens between Congress and the Execuitive as a turf war.  My question is whether Bush has been stepping over the line.  The framers of the constitution wisely placed the reigns of government in a balance between the branches ... when one branch oversteps it's bounds and grabs more power, then there is a legitimate concern.  I hope that the courts step in and restore a balance.  Otherwise, later, down the road a more unscroupolous president will use this procedure to grab even more power ... pretty soon whatever Congress does will be pretty much irrelevant.  You should be concerned too, because later down the road that unscroupolous president may be a democrat.
Seth says
M 2007-06-19 13:37:54 7697

The specifics you think are in the article are just statistics.  What law? When? What was the situation? What did president Bush write in a signing memorandum about the specific law? What was his thinking on the subject.  How large was the law he signed?  Was something buried in the written law (like an earmark) which would never have passed had it been exposed to the whole Congress?   I challenge you to dig that out of the article you cited!
Here are some specifics ...

Here are a few of the laws Bush has controversially issued signing statements about:

- In 2005, after Congress passed a law outlawing the torture of detainees, Bush issued a signing statement saying that he would

Maybe, maybe not.  I would prefer that the president just veto most of the shit that congress sends up for a signature.  OTOH, when you have cities declaring that they are "sanctuary cities" for illegal immigrants then maybe there is a precedent for laws that are merely a "suggestion".  Most laws require clarification in language & intent - that's what the court is for. Anyone that is frightened should take their case to court!

OOPS! I also forgot the mayor of San Francisco who said he would give out marriage licenses to gays in spite of a state law to the contrary.
The legislative branch of the government is empowered to pass laws.  The executive branch must then enforce those laws that are passed (or veto them).  That is the way it is setup in the constitution.  The executive branch cannot just wave away parts of the law that they do not like.  That is a clear overstepping of their mandate.  That is the start of a dictatorship.  We should not let Bush get away with it.
This is exactly what I expected from a Bush-basher. You expressly forgot to mention all the governments that are ignoring the laws except Bush.  Anyway, without specifics as to what were in any law, the signing memos, what was done by whom etc. it is all gratituous Bushma!

The specifics are in the Boston Globe article that i quoted above and in the government study on which it reports.   I didn't mention other  governments because that is irrelivant ... breaking the law is not permitted just because other people are doing it.  In any case the chief execuitive should lead by example ... he should not disrespect our laws.
Seth says
M 2007-06-19 17:05:33 7697

Sounds like a turf war in most of that.  Congress seems to think it can pass laws that restrict the executive branch beyond what is in the constitution & what is traditional. Again, I would suggest the president just veto the laws & we would find that most of the bullshit would go away or the government would end up in gridlock which would be an unintended consequence but an awesome result!   There are many liberals that don't like the fact the the president is the commander-in-chief & would rather he task the military by committee.  Loads of luck!
All of that is a change of subject.
Only in your mind!  Whenever you seem to slip in your belief in what you are saying you scream "change of subject" - you used to scream "straw man" - I detect evolution nowhere!
You asked for the details so i though you were interested in them.  Consequently i spent some time trying to find them for you because that indicates that we would be delving behind the sufrace of the news being projected from the MSM.  You had also asked for the details regarding Al Gore helping the internet.  To me that is useful research and what we should be doing here.  But apparently the actual facts on the ground were not really of interest to you because you ignored them and just repeated the same partisan opinions that you started with.  I am trying to improve the quality of our dialogue.  That is why i spent the time digging them up to answer your legitimate request.  Can we please actually improve the quality of our dialouge?
Mark de LA says
seth 2007-06-20 08:14:44 7697

The only question i have for you is: where you would draw the line?  Would it bother you if a president decided to modify a bill passed by Congress that you actually needed for your life?
You have ignored all of my previous arguments what good would it be to give you any more? I could give you an interlinear translation of your Boston Globe article, but you would continue to stroke your paranoia about Bush & wouldn't understand them! My interpretation is just the opposite from yours since I have more paranoia about Congress than I do the president. I think Congress is overstepping it's bounds writing laws on how the executive branch should execute it's perrogatives.  If Congress is empowered to do that they surely can stop the war cold in it's tracks, but they aren't & they can't -legally or politically. They can only exercise the power of the purse.  The same goes for all your examples from the BG.
Seth says
M 2007-06-19 22:38:42 7697

The only question i have for you is: where you would draw the line?  Would it bother you if a president decided to modify a bill passed by Congress that you actually needed for your life?
Mark de LA says
seth 2007-06-20 08:14:44 7697

The only question i have for you is: where you would draw the line?  Would it bother you if a president decided to modify a bill passed by Congress that you actually needed for your life?
Nothing the government, congress or the president, does is needed for my life unless they are pointing a gun at my head.
Seth says 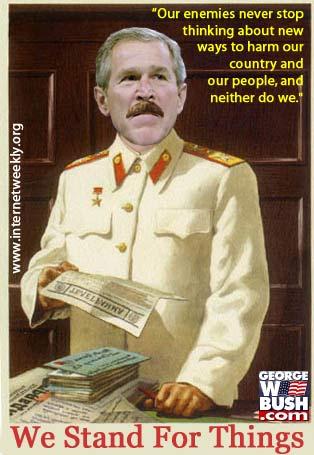 At least Dvorak gets it.

Mark de LA says
Maybe when you and Dvorak actually get it you will notice that your venom has dissolved your meat & minds leaving nothing left except dry bones and acid stomachs inside a pit of paranoia!  Enjoy the trip - hope it is worth it in the end.